CECAFA Cup under the age of 20 opens here 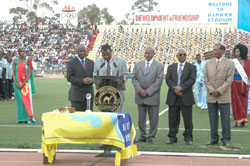 5th Central and Eastern Confederation of African Football Association (CECAFA) Cup under the age of 20 was officially opened today in the Asmara Stadium here in the capital under the theme: “Friendship and Development Cup”.

Asmara, 13 August 2010 – 5th Central and Eastern Confederation of African Football Association (CECAFA) Cup under the age of 20 was officially opened today in the Asmara Stadium here in the capital under the theme: “Friendship and Development Cup”.

welcome to CECAFA members and players, and indicated that since the achievement of its independence, Eritrea has been making substantial investment to the development of the nation’s sports potentials through formulating the necessary policies and strategies.   He further explained that Eritrea assumed membership in CECAFA in 1994, and subsequently joined CAF and FIFA in 1998. Mr. Tesfai expressed Eritrea’s pride for hosting such a tournament.

Likewise, the Chairman of CECAFA, Mr. Liegar Tanga, expressed appreciation for the warm hospitality accorded them and admired Eritrea’s excellent preparations in hosting the CECAFA tournament. He went on to say that the match would not only serve as a steppingstone in developing football in the region but also in promoting socio-economic progress.

Also speaking on the occasion, the Guest of Honor, Mr. Semere Russom, Minister of Education, pointed out that the 5th CECAFA Cup under the age of 20 is a special

event that creates solid ground for promoting prosperity in the region. The Minister noted that sports activities constitute a cornerstone for promoting harmony and diversity, which eventually pave the way for freedom and development.

Various shows were also staged at the opening ceremony by Eritrean artists highlighting the theme of the CECAFA Cup, thus adding color to the event.

Meanwhile, the Eritrean soccer team defeated its Tanzanian counterpart 1-0 in the initial match of the cup.

National soccer teams of Eritrea, Tanzania, Sudan, Kenya, Somalia, Uganda, Rwanda and Zanzibar are participating in the CECAF Cup under the age of 20 that would continue until August 28.

CECAFA 2010: For Friendship And Development