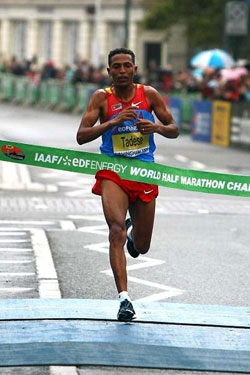 Eritrean Olympian Athlete Zeresenay Tadesse has been placed at the Guinness World Records 2011.

Athlete Zeresenay got such international honor after achieving double victory and breaking the previous records in the 21 and 20 kilometers road race that was held on 21 March 2010 in Lisbon, Portugal, according to information posted along with pictures on pages 270 and 271 of the Guinness World Records 2011.

It is to be recalled that Athlete Zeresenay not only stood first in the half-marathon road race by crossing the finishing line in 58 minutes and 23 seconds but also broke the record set previously by 10 seconds.

Athlete Zeresenai also set a new record in the 20 km-long road race in the same competition by finishing in 55 minutes and 21 seconds.