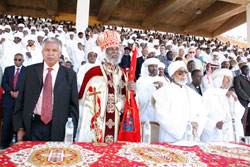 The religious holiday of Meskal (Founding of the True Cross) was today celebrated across the nation in a colorful manner.

Asmara, 27 September 2010 – The religious holiday of Meskal (Founding of the True Cross) was today celebrated across the nation in a colorful manner.

In celebrations held at the Bahti Meskerem Square here in the capital, religious leaders headed by His Holiness Abune Dioskoros, 4th Patriarch of the Eritrean Orthodox Tewahdo Church, that also included bishops walked around the Damera torch along with the singing of religious songs.

Speaking on the occasion, the Patriarch gave fatherly advice calling on the Eritrean people to strive for the development of the nation on the basis of mutual harmony and respect through keeping intact their respective faith.

Also in a preaching he gave regarding the religious event, Liqe Gubae Beyene Eyasu, said that Meksal holiday is viewed at with goodwill as it is celebrated in the month in which flowers blossom and fruits get ripe. In this respect, he called on the general public to extend a helping hand to need compatriots.

Present at the celebrations were the Eritrean Mufti, Sheik Al-Amin Osman, representative of the Eritrean Catholic Church and the Evangelical Lutheran Church respectively, as well as ministers, government and PFDJ officials, diplomats and tens of thousands of the faithful.