Effective accomplishments made in Southern region towards ensuring food security 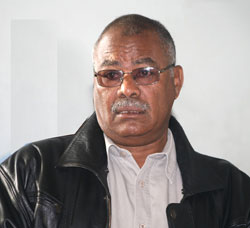 nistrator of the Southern region, Mr. Mustafa Nurhusein, said that effective accomplishments have been made in Southern region towards ensuring food security

Mendefera April 14, 2011- The Administrator of the Southern region, Mr. Mustafa Nurhusein, said that effective accomplishments have been made in Southern region towards ensuring food security. He made the remarks in connection with the regional symposium scheduled to take place between 16 to 17 April in Mendefera town.
Noting that the Southern region is endowed with extensive and fertile land as well as better distribution of rainfall, the Administrator explained that major programs have been implemented at an investment of 2.2 billion Nakfa so as to boost the output of grain, fruits and vegetables as well as milk and dairy products. Moreover, the number of dams in the region has been increased to 138 and that of reservoirs to 256, Mr. Mustafa elaborated, thus paving the way for obtaining 3 harvests annually.
In line with activities to expand irrigation farming, more than 10 thousand hectares is under cultivation towards ensuring reliable supply of fruits and vegetables.
Similarly, he pointed out that over 9,000 dairy cattle, about 150 poultry farms and bee farms that produce over 1,200 quintals of honey annually are available, Mr. Mustafa further explained that initiatives have been taken to promote land rehabilitation and combat desertification. Plans have also been mapped out to promote forestation as well as prevent the cutting down of vegetation, the Administrator added.
In the health and education sectors, Mr. Mustafa pointed out that gratifying achievements have been scored, and that telephone and transport service, potable water and electricity supply have been expanded. Moreover, asphalt and dirt roads in the region have witnessed remarkable growth.
Stating that the greatest success scored after independence is the nurturing of the culture of work and innovation as opposed to the retrogressive habit of looking for handouts and dependency in the days of colonial rule, Mr. Mustafa indicated that efficient and just management has been introduced, in addition to the strengthening of human resource development.
As regards future work action programs, the Administrator cited efforts to reinforce the boosting of grain harvest, expansion of electricity and potable water supply among others, in addition to the asphalting of roads along the Mendefra-Barentu, Dekemhare-Teraimni, Dekemhare-Tsorona routes.
The Southern regional administration encompassing 10,000 sq. Km.  and comprises 12 sub-zones is inhabited by nationals who earn their living through practicing agricultural and pastoral way of living, in addition to trading and labor activities.

Statement of the Alliance for Re-liberation of Somalia