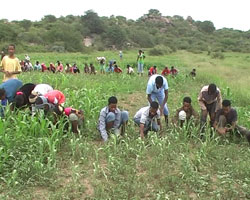 Popular campaign is underway in Elaerid sub-zone in which the people and students are taking active role.

Elaberid, 13 August 2011 – Popular campaign is underway in Elaberid sub-zone in which the people and students are taking active role.

The students engaged in the campaign said that they are carrying out reforestation, building terraces, renovating roads and the like. They also expressed satisfaction for participating in the on-going development drive.

The head of Agro-industry in Elaberid commended the active participation of the people and students in such campaign. The inhabitants on their part reiterated readiness to exert utmost efforts to make judicious utilization of the natural resources in their locality, in addition to conducting soil and water conservation activities towards ensuring food security.