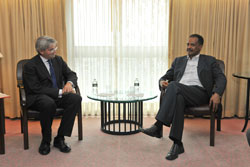 Reporters of the Ministry of Information indicated that during the discussion between President Isaias and Mr. Sergey Lavrov at the UN headquarters, the President and the Russian Foreign Minister agreed on strengthening relations between Eritrea and Russia and enhance mutual cooperation. Moreover, they agreed that the relations should encompass economic, trade and investment, as well as international political issues.

President Isaias further expressed Eritrea’s expectation that Russia as member of the Security Council should enhance its role as regards African development and progress.

Likewise, in a meeting at his suit with the UK Minister for International Cooperation, Mr. Andrew Mitchell, the President pointed out that development programs in Eritrea, especially ensuring food security are making headway. As a result, Eritrea is not affected by the famine hovering over the region, he elaborated.

Furthermore, President Isaias said that there exist ample opportunity to develop ties in the domain of trade and investment, and that both sides need to take practical steps to this end.

Mr. Andrew Mitchell said on his part that Britain supports Eritrea’s current extensive and positive diplomatic activities and that it wishes to develop bilateral trade and investment relations. He further explained that his country would follow up the matter.

Recalling that he visited Eritrea in 2009, Mr. Andrew Mitchell expressed desire to visit Eritrea again and continue the talks with President Isaias. Besides, the British official delivered Prime Minister David Cameron’s reply to the message President Isaias sent earlier regarding the border issues.

Similarly, during the talks the President held with his Nigerian counterpart, Mr. Goodluck Jonathan, the two leaders asserted that Eritrea and Nigeria are ready to work jointly towards ensuring African development, in addition to upgrading the continent’s voice and role in international forums.  Following exchange of views on issues of mutual interest and that of Africa, the two leaders assigned the Foreign Ministers of Eritrea and Nigeria to map out concrete programs aimed at developing relations between the two countries.