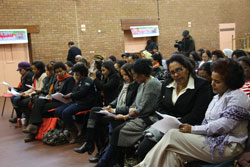 Asmara, 12 February 2013 – Reports indicated that Eritrean community members residing in London city commemorated the 23rd anniversary of Operation Fenkil.  The community members asserted that the historical value of the Operation would remain intact as a legacy of generations.

Speaking at the event, Mr. Tesfamichael Gerahtu, the Eritrean Ambassador to the UK and Ireland, indicated that the role of the Eritrean people in the Homeland and abroad has become

significant in the nation-building process, and called on the participants to step up participation in national development programs.

A number of youths took part in the event in which high spirit of patriotism was witnessed.

Meanwhile, the NUEW branch in the UK conducted its annual meeting and elected a managing committee that would serve for this year.

Ambassador Tesfamichael commended the active role of women community members in State affairs, and called on them to sustain their input to this end.

The participants of the meeting on their part voiced staunch resistance against enemy conspiracies, and said that they back up efforts being exerted by the Union in the Homeland.