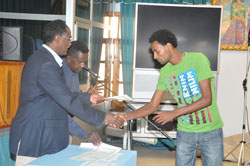 A total of 185 new staff members of the Ministry of Information who have been attending a training course in Principles of Journalism graduated today.

Asmara, 28 February 2013 – A total of 185 new staff members of the Ministry of Information who have been attending a training course in Principles of Journalism graduated today.

The training which was conducted in Nefasit in collaboration with the Ministry of Education and the Administration of the Northern Red Sea region involved journalism basics, still and video photography, principles of marketing, as well as media law and ethics, besides orientation with the objectives and functions of the State media.

Mr. Sibhatu Kifle, head of human resource development in the Ministry, pointed out that it has been exerting efforts to enhance the impact of media outlets through reinforcing its capacity to this end. He further commended those who played active role in the course of the training.

A representative of the graduates, Idris Nor, said that they would do their level best in their media careers.

Mr. Mohammed Omar Suba, director general of the press department, indicated that dissemination of accurate and balanced information in the present era demands dynamic human capacity, and called for the beneficiaries of the training to demonstrate commitment in their new occupation.

81 of the graduates have been in an internship, while the rest concluded a theoretical portion.

Hagaz sub-zone: Area administrators called upon to step up efforts regarding promoting community-based style of living