Youth Center being constructed in Hagaz 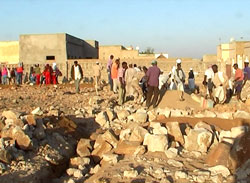 A Youth Center is being constructed in Hagaz semi-urban center in collaboration with the residents and members of the People’s Army.

Hagaz, 18 February 2014 – A Youth Center is being constructed in Hagaz semi-urban center in collaboration with the residents and members of the People’s Army.

The participants of the project expressed conviction that the Center would make significant impact as regards nurturing cultural values, and asserted that they would sustain their input in the process. They further indicated that a similar previous Center had limitations in infrastructural scope, and that enhanced efforts are being exerted by the local Administrations towards developing services by the latter center.

Among the participants, Mr. Andemeskel Zerabruk, Mr. Mohammed Mantai, Mr. Misgina Mebrahtu and Mr. Idris Osman indicated that popular undertakings have made significant impact regarding improvement of community livelihood, and that  the putting in place of the new center is vital pertaining to nurturing virtuous youths.

Mr. Yohannes Berhane, coordinator of the project, disclosed that the Center, the construction of which is expected to get finalized shortly, comprises sports fields, cafeteria, toilet, shower room, among others.

Mr. Jemal Woldit, Head of the NUEYS branch in Hagaz sub-zone, stated that additional endeavors are being made in a bid to equip the youth members with knowledge and skill knowhow, and that more training courses would be organized shortly.