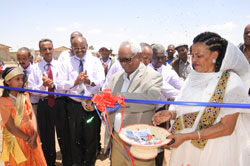 A community library which is equipped with computer, internet and other facilities was opened yesterday in Auget camp, Asmara.

Asmara, 1 June 2014 – A community library which is equipped with computer, internet and other facilities was opened yesterday in Auget camp, Asmara.

Speaking at the inauguration of the library by Maj. General Ramadan Osman Awliyai, Administrator of the Central region, the Minister of Education, Mr. Semere Rusom, lauded the members of Auget Community for the relentless efforts they made since 2008 to launch the library.

Mr. Tekle Gebrekidan, Chairman of the community, explained that the putting in place of such facilities is aimed at nurturing virtuous youths who are equipped with knowledge and ethical conduct. He further lauded the input of government bodies, national Associations and companies, as well as interested individuals in the process of the putting in place of the library.

Parent and youth members of the community expressed satisfaction with the facility, and said that they would extend a helping hand towards promoting its effective utilization.

Individuals who demonstrated significant participation in the process receives awards from the Administrator of the Central region and Mr. Zerit Tewoldebirhan, Managing director in the regional Administration.