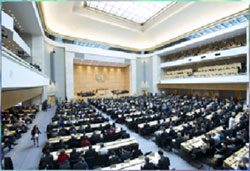 Eritrea has been elected as a 3-year member of the Executive Board of the World Health Organization (WHO) at the 67th International Conference conducted in the Swiss city of Geneva from 19 to 24 May.

Asmara, 06 June 2014 –Eritrea has been elected as a 3-year member of the Executive Board of the World Health Organization (WHO) at the 67th International Conference conducted in the Swiss city of Geneva from 19 to 24 May.

In a speech she rendered at the meeting, Ms. Amina Saleh, Minister of Health, pointed out that Eritrea is in a position to be among the few countries which have made remarkable achievement in line with the Millenuim Development Goals thanks to the joint endeavors exerted on the part of the Government and the people. She further indicated that mother and child mortality rates have respectively shown decline by 75% and 67% respectively, in addition to disclosing that gratifying achievements have been registered as regards control of communicable diseases.

Ms. Amina said that the secrets behind such significant move pertains to soundness of the health strategies pursued, and the initiatives taken towards promoting human resource capacity, health outreach, medical supply, health service quality, as well as joint ventures with communities. “The impact made in this regard along with other achievements in the socio-economic domains have given rise to increased life expectancy rate at 63 which stood at 49 before independence, and this attests to the government’s stance regarding human rights,” she underscored.

Moreover, the Eritrean delegation headed by the Minister of Health took part in the Meeting of the International Auditor of the WHO representing Africa, and issued a proposal stating that the report should portray the objective situation and potential along with the advantages of the continent, according to reports.

The delegation also met Dr. Roberto Thomas Morales, the Cuban Health Minister and WHO President, as well as the Health Ministers of other countries, in addition to conducting discussions regarding bilateral relations of partnership.