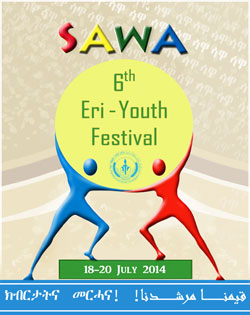 Reports indicated that Soira Award would be given at the 6th Youth Festival in Sawa to youths who demonstrated excellence in their respective careers.

Asmara, 02 June 2014 – Reports indicated that Soira Award would be given at the 6th Youth Festival in Sawa to youths who demonstrated excellence in their respective careers.

Mr. Se’ad Ramadan, Chairman of the award’s committee, indicated that it is aimed at recognizing the merit of youths who made exceptional contribution in their careers.

Accordingly, a number of nationals aged up to 40 have been listed for the award for their creative works, exceptional work accomplishment, productivity and decision making, while 12 out of 21 candidates have been selected.

Ms. Yasmin Tesfalidet, a member of the committee, indicated that creative projects with an innovative potential in markets and others that can favor domestic production were focused on more, while collective works were encouraged more. She further stated that the award is in line with the efforts being made to inspire the role of the youth in the national development programs, and that the awardees are from Government and PFDJ institutions as well as others engaged in private works.

Collectively, a total of 70 projects focusing on Information Technology, Electronics and Mechanics from all over the country were made available for the Award’s contest this year.