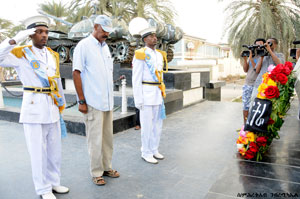 Present on the occasion were Ministers, regional Administrators, Army Commanders, senior government and PFDJ officials, as well as participants of the commemorative event.

President Isaias also inaugurated a sculpture prepared by Artist Mulugeta Ogbatensae, highlighting an assault by tanks of the liberation forces in Sigalet Ketan, the heavy sacrifices paid and the heroic feats of the freedom fighters witnessed thereof.

Moreover, the President inaugurated and observed a pictorial exhibition by the Ministries of Information and Defence, in addition to housing styles and traditional dances from the sub-zones and Fighters Associations.

Different sports activities were also conducted, and that carnival shows, documentary films and performances by cultural troupes were scheduled for the afternoon hours.