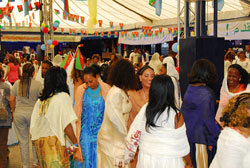 ns conducted in Rome in which a number of Eritrean nationals and Italian friends of Eritrea participated, Mr. Zemede Tekle, Eritrean Ambassador to Italy, stated that the impressive achievements registered through resolute rebuff and concerted action would be further enhanced.

The celebrations characterized with active youth participation featured cultural shows that won broad acclaim on the part of the participants.

Also in similar celebrations in Johannesburg, a number of  Eritrean nationals from different parts of South Africa  and invited guests took part.

Mr. Kalid Abera, Charge d’Affaires in the Eritrean Embassy to South Africa, gave briefings on the economic, political and social developments in the Homeland. He further called on Eritrean nationals in that country to step up contribution to the integrated national resolute rebuff.

Likewise, Eritrean citizens in Seattle and its environs, USA, colorfully celebrated Independence Day, during which they reiterated readiness to stand alongside the people and the Government.

Diplomacy of Peace and Development