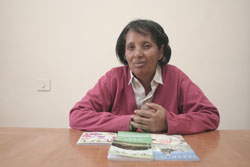 She was nicknamed after the main character in one of her books. Ms. Genet Sium is a freedom fighter who started writing books during the armed struggle period. She is one of the handful women writers in Eritrea. Some of her works include Shigom, Enda-Zib’e, and Tsegiat. Shabait conducted an interview with Ms. Genet Sium. Excerpts follow:

Can you please tell us something about your background?

I was born in Korbaria, Southern region, and learned there until grade 6. I was a good student but unfortunately I was forced to withdraw in 1975 when social unrest reached its highest peak. Then I was married to my teacher in 1976. During that time, all my colleagues were talking about nationalism in school and one by one left to join the armed struggle. The Derg regime on its part continued to commit vicious atrocities on civilians. One thing I couldn’t erase from my mind was a mother with her children killed in front of my eyes and our house was turned to ashes by a bomb. All those events stripped me of the desire to lead a normal life slowly and I began to grow more agitated. So, all my intention was to join the liberation struggle.

How would you describe your experiences as a freedom fighter?

At the beginning, joining the EPLF was not easy for me since I was married and the revolution did not allow me to join at that time. So, I insisted on getting divorced, and it took me almost a year to get recruited. I took military training in Blekat in 1977. At the end of our training, I wrote a drama about the disadvantages of practicing harmful traditional medicines based on experience I acquired in my village. Then I was assigned to work there in the training center as receiver of new recruited females in Solomuna and stayed there for about 11 years.  Everyone then knew me as Genet Solomona. I was later assigned to the central health station in 1988.

When did you write your first book and how was the feedback?

I started writing Shigom in 1984; however, I finished it in 1987 due to various reasons connected with the war. At some point, I was not even sure if I could finish it before I was martyred. The book partially narrates my life history, and on the other part it talks about compatriots who paid their lives for the sake of freedom.  It was narrated in 1988 by Radio Dimtsi Hafash during which such narrations were uncommon. The feedback was very stong which was beyond my expectaton.

What is your opinion as regards literature during the armed struggle and women’s participation in particular?

For Eritrean women, the armed struggle had opened a wide opportunity to participate in male dominated areas and prove themselves capable. Many female compatriots used the provided opportunity and upgraded themselves as leaders in many areas. However, the fact that they grew up in a society that underestimates women, made it difficult for women to develop in the profession of writing. Literature is a reflection of society and a person’s background is important.  I could say that my background helped me to write a story. There was no discrimination in the house I grew up. I was free to do anything. Most of Eritrean women unlike me had only tasted freedom in the armed struggle.

Tell us about your educational background before joining the armed struggle?

Unlike independence, access of education was limited in the country. Out of 500 children only 50 were allowed to attend school where I grew up. I was lucky enough to get an educational opportunity. On top of this, my mother strongly supported for her daughters to get educated. I do not how she came to understand the advantage of education as she was illiterate herself. Thanks to her, all my sisters and I were able to go to school.

How many books have you written?

Following the feedback from Shigom, I wrote Aini-Titsum which was about social life.  After independence, I published Enda-Zib’e a collection of three short stories, and Cheka-Adi composed of four short stories as well as Kolilkum Habuna about HIV/AIDS.  I wrote my last book, Tsegiat, about female anatomy based on the knowledge and experience I have gained in my work. After independence I continued my education in nursing school and worked as gynecologist. So, I understand that most of the fatality and complications faced by mothers can be avoided if we enhance our knowledge.   It was regarding this that I wrote this book and peoples’ feedback has been encouraging. I am happy that I could write a useful book.

What kind of  book are we going to expect from you next?

Until now I haven’t wrote any thing for children, so I am planning to write tales for young children.

What would you like to say to fellow writers?

Regardless of the quality of books, books are being published and history is being uncovered. And this is very encouraging as we are still beginners in this area. We have a very rich language and culture that waits to be written about again and again. Thus, let us write and learn from others’ experience to preserve our heritage.