The Prickly Fruit Of Summer 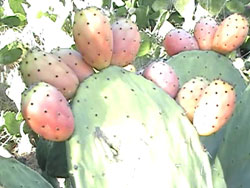 Witnessing a crowd eating a fruit with bare hands and a number of venders selling the same product in the streets is one of the usually scenes in the summer season in Eritrea. Despite the prickly covers of the fruit, everyone seems to enjoy this fruit. No table manner, chef or talent is needed in preparing and eating the fruit, all one has to do is have a knife to peal the pads and enjoy the fruit. Those prickly cactus fruit locally known Beles is the most liked fruit of summer in the country.

At present the Cactus Fruit grow almost in every part of the country. Some say that in addition to those that grow by planting the pads, there are also few areas that have the plant by dispersion through birds that fed on the fruit. The Cactus Fruit is believed to be originated in Mexico where the local people used to eat the pads as common vegetables. Those plants known as cactus fruit all have flat, fleshy pads that look like large leaves. The pads are actually modified branches or stems that serve several functions — water storage, photosynthesis and flower production. Chollas are also members of the Opuntia genus that have cylindrical, jointed stems rather than flat pads.In addition to the advantage the fruit has as being a source of food to various animals and human beings, it is also used in various deforestation schemes.  At present the seeds of the fruit are also begun to be used as ingredients in production of various makeup. As a result, there are a number of farm lands in North African countries that start to grow the Cactus Plant as an industrial product.

Generally the cactus fruit that grow in Eritrea is categorized into two. They are locally known as Beles Dekuie and Beles Testse. Beles Dekuie is larger in size and the fruit has fewer seeds. These types of cactus grow up in plain areas and do not have the sweet taste that majority of cactus fruits in the country. Beles Tsetse has large pads but it is smaller in size, usually grows in mountainous and hill dominated areas and have unique flavor of sweetness.

There are also other types of cactus like Beles Lematse which have smooth surfaced pads and almost do not have pricks. This type of cactus grows in escarpments and has similar taste like those of Beles Dekuie. Beles Kuhulay grows at the end of the summer season and in areas of thick forest. The type of cactus grows in such places has sweet taste and is cold to the mouth which makes it favored by most of cactus fruit consumers.

The cactus knows as Chegour Beles locally has large pads and long and thick pricks, and has sweeter taste than the other types of cactus. Mego Beles has tall, thin pads with fewer pricks and is larger in size and has a reddish color and sweeter taste. Beles Wari has small, round shaped pads and is light dark color. This type of beles is not common in most of the areas that grow cactus trees.

Maymayo Beles is the type of beles grows in sandy places and has no flavor of sweetness and usually is eaten by pastoralists in times where they are thirsty. Beles Tsaeda is white in color with more seeds and whiter pads. This type of cactus usually grows in the middle of the summer season. The last type of cactus that grows in Eritrea is the Sa’asa’a Beles grows in the winter after almost all types of the fruits and has yellowish pads.

Despite the benefits of the cactus fruit the ability of the plant to sustain drought and grow in various types of land structure and not requiring any fertilizers in addition to the advantages the plant has in protecting deforestation makes the plant unique.

Building a Nation through Enhanced Inputs of Nationals

“When You Add On The Already Invented, Then You Are Above The Invention” Kibrom Ogbazghi