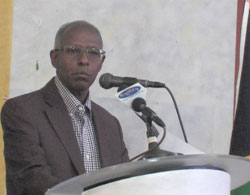 The first public lecture of Eritrea-South Africa Festival was conducted here in the capital yesterday.

Asmara, 7 February 2015 – The first public lecture of Eritrea-South Africa Festival was conducted here in the capital yesterday. The event was jointly organized by the People’s Front for Democracy and Justice and the South African Embassy.

Explanation was given by Ambassador Welile Nhlapo on the topic “South Africa 20 Years Later (1994-2014): The Challenge & Progress of Nation Building”. In opening remarks, Mr. Yemane Gebreab, Head of Political Affairs at the PFDJ, explained that South Africa has scored impressive achievement since liberation as regards meeting the basic needs of the population, which is a good experience for other African countries. In this regard, Eritrea is exerting vigorous endeavors to the same end, he underscored.

In his speech, Ambassador Welile Nhlapo on his part stated that Eritrea and his country share similar experience in the nation-building process.

In this respect, he pointed out that Eritrea too would succeed in its nation-building endeavors.