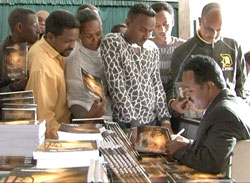 An educational book “Electronics and Technology” written in English by Eng. Semere Habte and “Menfek” by Mr. Haile Gebrehiwot launched on 6 February.

In a speech he delivered at the launching ceremony conducted at the Ertro-German hall, Mr. Haile Gebrehiwot, author of the book “Menfek” said that the book includes seven short stories in 146 pages, and that depicts the living conduction of the society in general and that of heroic feat of the Eritrean heroes in particular.

Journalist Biniam Fesehatsion who presented his assessment on the book “Menfek” which is based on true events said that the book describes the living conditions of the society, issues of health and HIV and the martyrdom paid for independence, and he lauded the efforts conducted by the author.

Likewise, at the launching ceremony conducted at Ambasoira Hotel, the author of the book “Electronics and Technology” Eng. Semere Habte indicated that the book is aimed at explaining the timely developments being made on TV sets and computers, and that it would help the youth develop their knowledge alongside the development of technology.

Mr. Asmerom Kidane, who presented his assessment on the book “Electronics and Technology”, indicated that the book incorporates both theoretical and practical guidelines on TV and computer maintenance, and that it would have a significant contribution for technical education institutions.